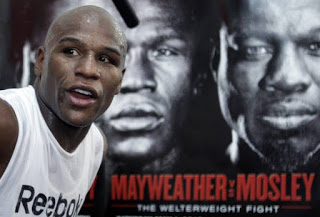 In the sport of boxing, a fighter knows to never get sucked into his opponent’s game.
According to Floyd Mayweather Jr., May 1 is still over two weeks away and Shane Mosley has already made that mistake.

Known as a relatively quiet guy, Mosley has been noticeably more verbal with Mayweather while promoting their welterweight bout next month at the MGM Grand Garden Arena.

The current WBA champ also felt motivated to get some new body art in anticipation for May 1, all the more evidence to Mayweather that his opponent is not himself as the fight draws closer.

“I think he’s kind of out of character,” Mayweather said. “We all know that’s not the real Shane Mosley. The guy waits until he’s 38 to get tattoos? Come on.” read more