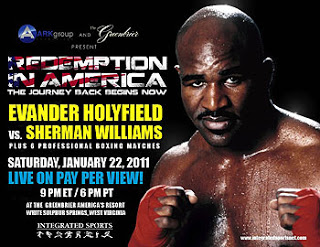 Holyfield hopes solid wins over Williams, and Dane Brian Nielsen in March can achieve the unthinkable and propel the 48 year old into yet another world title fight.

Once a nailed on cert for most peoples top-ten ”greatest heavyweights of all time,” in recent years Holyfield’s career has become little more than a worrying side-show. One of the biggest earners in the history of the sport, Holyfield now appears to have serious financial issues. Last year he and his wife split amid accusations of spousal abuse.

Despite his advancing years and receding reflexes, he is still in tip-top physical condition, weighing a solid 222 lbs for tonight’s encounter, and can still turn in the occasional performance, albeit one a far cry that of his 90’s zenith.

In a 27 year pro career, Holyfield (43-10-2, 28 ko’s) has claimed the scalps of ring legends like George Foreman, Larry Holmes and Mike Tyson (twice), and should have beaten Lennox Lewis in their rematch after being gifted a draw first time around.
Added to that list are former heavyweight champions Pinklon Thomas, Mike Dokes, Buster Douglas, Riddick Bowe, Michael Moorer, John Ruiz and Hasim Rahman.
Prior to winning the undisputed heavyweight title with a third round knockout over the man who had exploded the myth that was Mike Tyson – James ”Buster” Douglas – in 1991, Holyfield had unified the cruiserweight division, twice defeating the fearsome ”Camden Buzz-Saw” Dwight Muhammad Quawi.

In the early naughties Holyfield’s reputation slumped to an all-time low when he suffered three straight defeats against Chris Byrd, Larry Donald and James Toney. All three men where quality heavyweights in their own right, though hardly in the class a peak Holyfield, but the result was that Holyfield had his boxing license revoked in the states of New York and Nevada, effectively freezing him out of any possible big heavyweight fights in the US.

Holyfield returned to action in 2006, and fought a series of four fights in the state of Texas. The wins over second tier heavyweights Fres Oquendo, Jeremy Bates, Vinny Madalone and Lou Savarese re-established Holyfield as a contender.
In October 2007 he challenged Sultan Ibragimov for the WBO heavyweight title in a bout held in Moscow. Holyfield easily lasted the course against the clever, hard hitting Ibragimov, but was clearly outpointed.

Far from discouraged, Holyfield pursued – and was granted – a shot at the WBA title holder, Nikolay Valuev, another Russian.
Valuev, the largest heavyweight champion in boxing history at 7´2” and a colossal 320 lbs, surely looked to have the potential to seriously harm the 46 year old Holyfield.
Not a bit of it.
Holyfield out-boxed the giant for much of the fight and was never close to getting hurt. Valuev kept the contest close by applying constant pressure, and by the twelfth it was anyone’s fight. Holyfield finished the stronger, and the buzz from the ringside pressmen was that the Atlanta veteran had pulled off a remarkable upset.
When the scorecards were announced however, Valuev had retained his crown with a majority decision.

The Holyfield camp lobbied the WBA for a rematch. In the meantime, Valuev defended his title against Britain’s David Haye. In a drab encounter, Haye appeared to do less against the Russian than Holyfield had, yet was awarded a controversial split decision and with it the title.
Holyfield – so close to becoming champion again, was left out in the cold.

He returned to action last April with a comprehensive eight round thrashing of 41 year old former IBF heavyweight champion Franz Botha. The victory enthused Holyfield, who boasted that he would beat David Haye easily, ig given the chance. Indeed, Holyfield was on a short list of opponents for Haye late last year. In the end Haye went with fellow Brit Audley Harrison, who capitulated spectacularly in three rounds.
Would Holyfield have done any better? One would like to imagine so.

Can 39 year old Sherman Williams (34-11-2, 19 ko’s) derail Holyfield’s latest comeback?
The bulky Bahamian, just 5′ 11” yet 258 lbs for tonight’s fight, has been a pro since 1997, hits hard, and is certainly durable, having only been stopped once, by then unbeaten Robert Davis in five rounds way back in 1999.
Career highlights for Williams have been holding a young Jameel McCline to a draw in 2000, and extending an undefeated Ruslan Chagaev to an eight round decision in 2005.

Williams hasn’t lost too many lately, going unbeaten for four years after his loss to Chagaev before losing to unbeaten German based Lebanese prospect Manuel Charr in 2009. He hasn’t fought since.

Can Williams spring an upset? He can certainly bang, especially with the overhand right, and as the old adage goes, when a big guy hits you on the chin, it can be ”lights out!”

Holyfield is always resolute in his pre-fight preparation, and will no-doubt have done his homework on Williams. Holyfield should win comprehensively on points, and the bookies agree, making Evander a heavy 1/12 favorite, with Williams the 6/1 underdog, but if there is going to be a knockout, it could come from a Williams haymaker.