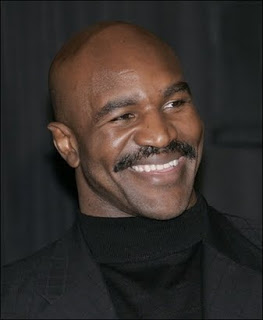 ”My goal has always been to be the undisputed heavyweight champion. He (Haye) has a belt and I want them all. I wish could fight him right now.”

On the subject of Haye´s title defense last Saturday night against John Ruiz, Holyfield said;
”Ruiz didn’t hold. He fought, which made it more exciting, but he still lost.”

Haye originally won the title with a majority decision over the 7´2´´ Russian giant Nikolay Valuev in Nuremberg, Germany last November.

Holyfield himself came within a whisker of taking Valuev´s crown eleven months earlier, losing a majority decision in a title bout in Zurich, Switzerland.

Interestingly, Holyfield appears to have put on a better performance against the Russian than Haye did. Where many boxing scribes felt that Haye hadn’t done enough to take Valuev´s title, and was extremely lucky to get the verdict, the same writers were virtually unanimous in their assertion that Holyfield had been robbed.

This Saturday´s fight with Botha will be the first time the American has been in the ring since the Valuev fight.

Even at 47 years old, Holyfield (42-10-2, 27 ko´s) remains one of boxing´s most famous faces, despite being way past his best. Had Holyfield gotten the decision in his November 1999 WBA/WBC/IBF unification rematch with Lennox Lewis, he may well have retired then and there, his legacy as one of the greatest heavyweights of all time set in stone.

Instead, after losing the decision in a fight many at ringside thought he´d won, he chose to box on. And on.

Since 1999 his record stands at 6-6-2. After the Lewis loss, the once mighty Holyfield has also been beaten by such fistic luminaries as John Ruiz, Chris Byrd, Larry Donald, Sultan Ibragimov and Nikolay Valuev, all decent enough fighters, but hardly in Holyfield´s class.
The low-point of the last decade for Holyfield was a 9th round TKO loss to trash talking pumped up middleweight James Toney, only the second stoppage defeat of his 25 year career.

Holyfield will always be remembered for that surreal night in Las Vegas in 1996 when as a 14-1 underdog, and with the majority of sports writers genuinely fearing for his life, he battered the fearsome Mike Tyson from pillar to post for 11 rounds to win the WBA heavyweight title.

Prior to that fight Holyfield was considered a shot fighter. He had been stopped in eight rounds by Riddick Bowe in the final chapter of their trilogy just one year earlier, and wasn’t given a prayer of a chance against Tyson. But that night Holyfield proved to the world what an incredible fighting machine he truly was.

The win against Tyson gave Holyfield his third title reign. His first came when he knocked out Buster Douglas in three rounds in 1990. After losing his crown to Riddick Bowe, he regained it from him in 1993. Holyfield´s fourth reign as champion came in August 2000, when he outpointed John Ruiz for the vacant WBA title.

Such is Holyfield´s name and reputation entrenched in modern heavyweight folklore, it´s often forgotten that he was undisputed world cruiserweight champion in the late 1980´s, and regarded as that division´s greatest ever fighter.

Ironically for a man who has held as many world title belts as Holyfield, he will be attempting to take Botha´s lightly regarded WBF heavyweight crown when the two meet in Vegas this Saturday.

”I’m happy to have the opportunity to fight in Las Vegas again. Everything that’s happened to me has been here – in 1984 I had to win Saturday and Sunday to make the Olympic team. In 1990, 1993, 1996 and 2000 I won the heavyweight title here. Las Vegas has been the place that’s given me the opportunity to be the person I am. I’m thankful for Botha giving me an opportunity to fight for a title again. My goal has simply been to be undisputed heavyweight champion. I’m a person – I think my attitude is good when people tell me I can’t do something — I’m driven by what people say I can’t do to prove I can. I’m not disappointed by decisions. I felt I beat Valuev. I won’t quit seeking to do my best and Saturday night you’ll see me give my all. If not enough, I’ll make adjustments.”

Holyfield summed his intentions up by stating;

41 year old Franz Botha (47-4-3, 28 ko´s) who briefly held the IBF heavyweight title before being stripped of it after failing a post-fight drug test, showed enormous respect for his opponent;

”I’m defending my title against one of the greatest legends of all-time. This will make my resume perfect. I’ve fought some of the best and Evander is one of the best. Saturday night, I’m prepared for this. Evander had talent and experience. I’m getting in there knowing it’s going to be a tough fight. ‘The White Buffalo’ is roaming the prairie. I’m going to end your career, make you retire. The Buffalo is charging.”

Botha made his own intentions clear;

”I’m very grateful to be here. Me and Evander would have fought 10 years ago. I was No. 1 and he was champion. It didn’t work out. You’re a legend. You’ve fought some of the greatest, but I have to stop that. Saturday night you’re going to see a helluva fight.”

Holyfield was originally scheduled to fight Botha way back on January 16th at the 80,000 seater Nambole Stadium in Kampala, Uganda. The fight´s promoter Eddie Bazira then re-scheduled the bout for February 20th
When it became clear that Bazira was having problems raising the first installment of the fighter’s purses, Holyfield chose to pull out, and the bout was re-scheduled to Las Vegas and the Thomas and Mack Center.

In recent weeks, Holyfield´s world has been rocked with the very public accusations of domestic violence by his wife Candi. It remains to be seen if those revelations have an affect on his performance against Botha.

Californian based, South African born Francois (Franz) Botha remains one of the heavyweight division´s more colorful and likeable characters. Botha briefly held the IBF heavyweight title when he outpointed Axel Schulz in 1995, but was stripped of it soon after when he tested positive for steroids following a post-fight drug test.

The South African is probably best known among fight fans for being the victim of Mike Tyson at his most ‘foul’, when Tyson attempted to break Botha´s arm during the second round of their fight in January 1999.
In what was Botha´s finest hour, he out-boxed Tyson for four and a half rounds before running into a hallelujah of a right hand in the fifth round.

At 6´2´´ Botha is the same height as Holyfield, but the burly South African could outweigh the ”Real Deal” by more than thirty pounds on the night. Both men have fought 54 times, though Holyfield has fought harder fights at a higher level on a more consistent basis. Is is safe to assume that Holyfield´s career has taken more out of him than Botha´s has.

This writer predicted as far back as last November on bettinpro.com that a Haye v Holyfield fight could happen. I still believe it could, but first Evander has to deal with the ”White Buffalo.”

This should be a surprisingly entertaining and competitive fight. Expect Botha to come out throwing bombs in the early rounds, with Holyfield looking to box cagily and stay out of trouble. By the sixth, the bulky South African will be blowing hard, and that´s when Holyfield will make his move, taking Botha apart with his patented left hooks. By the eight Botha will have nothing left, and Holyfield will either knock him out, or the referee will come to the South African´s aid.

Holyfield by eighth round knockout.