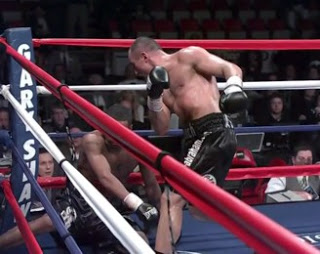 Late Saturday night at the Joe Louis Arena in Detroit, Andre ”The Matrix” Dirrell turned the Super Six World Boxing Classic upside down with a masterful performance against tournament favorite, Berlin based Armenian ”King” Arthur Abraham.
The final result was steeped in controversy; in the eleventh round Dirrell slipped in Abraham´s corner and went down on one knee – and Abraham, in hot pursuit, delivered a powerful right hand to Dirrell´s unprotected head, apparently knocking him unconscious and earning himself an immediate disqualification.
For a while, with Dirrell twitching on the canvas, one feared the worst. Dirrell´s brother Anthony, also an undefeated super-middleweight, had to be physically restrained from attacking Abraham in the ring. When Dirrell came to, he believed he was in Las Vegas – thought he has lost the fight, and began weeping.
He had in fact registered the biggest victory of his career and ended the long unbeaten streak of Abraham, who will fight Carl Froch next, hopefully later this year.
26 year old Dirrell (19-1, 13 ko´s) put on a master class of precision boxing and sharp punching allied with excellent footwork to make the fearsome Abraham look pedestrian and limited. 30 year old Abraham´s usual tactic of marching in behind his high, peek-a-boo style guard and looking to land his heavy shots played right into the hands of the 6´2´´ Dirrell, who punished him at a distance with fast right jabs and powerful straight lefts from his southpaw stance. ”The Matrix” proved extremely hard to nail, and even when Abraham connected solidly in the third with left hooks, Dirrell took the shots well. Dirrell scored a flash knockdown in the fourth when he caught an off balance Abraham with a left. The Armenian looked more annoyed that hurt when he got to his feet.
Abraham (31-1, 25 ko´s) caught Dirrell with a hard left-right in the fifth, but Dirrell stormed back with a six punch combination of his own. That pattern continued throughout the fight. It was compelling and occasionally exciting and with Abraham´s noted one-punch knockout power, there was always that element of danger, but the fact was Abraham was being out-punched by Dirrell 10-1.
Dirrell opened a cut over Abraham´s right eye in the seventh. The fight looked in jeopardy when referee Laurence Cole called time-out for the ringside physician to examine the cut in the ninth, but the bout was allowed to continue.
The threat of a stoppage galvanized Abraham, and there was a greater urgency in his work that continued into the tenth. What looked like a perfectly legitimate knockdown from an Abraham right flush on Dirrell´s jaw was inexplicably ruled a slip by the referee. Nevertheless, it was a big round for the Armenian, his best of the fight, and there was just the slightest feeling that the tide might be turning and there may yet be a dramatic ending.
That was to prove to be the case, though not in the way that Abraham, nor Dirrell would have expected or wanted.
Upcoming Super Six fight odds;
24th April – Carl Froch 11/10, Mikkel Kessler 4/6
20th June – Andre Ward 1/6, Allan Green 4/1 bet365