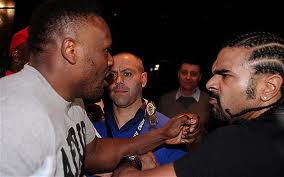 First of all, let’s not lose sight of what should be the main story today: Derek Chisora put on an outstanding challenge for Vitali Klitschko’s WBC heavyweight title in Germany on Saturday night.

Not since his six rounds of mayhem with Lennox Lewis nine years ago has Big Vitali been so thoroughly tested, and by a man ranked only 15th by the WBC going into the fight (and will surely place much higher in the next rankings.)

Chisora set a ferocious pace right from the opening bell, bulling Klitschko around the ring, scoring with clubbing body shots and just missing with looping lefts and rights to the head. He may have been out-boxed and outpunched for large portions of the fight, but he was always competitive, and always looked capable of landing the big shot that would turn the fight around.

Chisora had his successes, and from the fifth to the ninth looked to be taking control of the fight. Too often however, he would only fight for half of a round, starting impressively and then letting the vastly more experienced Ukrainian take the play away from him and finish the round with a flourish. 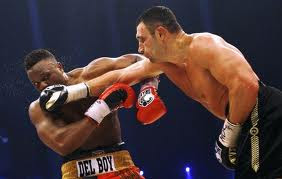 Neither man was visibly hurt, although Chisora was spitting blood in his corner throughout the latter rounds, while the Brit’s body assault looked to be draining Klitschko near the finish. Indeed, the champion looked a shadow of his former self at the end, and embraced his brother Wladimir at the bell in a manner that was more relief than elation.

The score cards were unanimously one-sided, Klitschko winning eight rounds on each of them. Had the fight been in the US where judges like aggression and had Klitschko been a mere contender rather than a legendary champion, the result may have been different.

Of course, Del Boy being Del Boy, the night was far from over. He looked like he was about to start fighting with Klitschko again after the result was announced, and then got into a slanging match with Wladimir, who clearly wants a piece of Chisora. Soon after came the post fight interview and the ensuing Chisora Haye punch up that is now making news all over the world. Here is a transcript of the actual press conference:

Bernd Boente, manager of Vitali and Wladimir Klitschko: With the bad experience we’ve had with British fighters, we will now look for other countries. Contrary to David Haye, Dereck Chisora really went for it. He really tried.

David Haye (from rear of the room): You don’t want to fight David Haye, no?

Boente: You had an offer. You didn’t accept it. Now you are out. You are out. Out, out, out. You cannot talk yourself back into the fight; you have no belts. Chisora showed heart, contrary to you. You showed your toe [referring to Haye’s toe injury].

Haye: I accepted your offer in December.

Dereck Chisora: We’ll get it on in London – be quiet. David Haye is an embarrassment, Sky Sports don’t do Box Office any more because of David Haye. He messed it up for all those young fighters coming through. I’m going to give you two slaps for that. If Haye is a fighter, he should fight me.

Chisora’s trainer Don Charles: Be quiet, can security get him out of here?

Haye: Vitali said after his last fight, ‘I want to fight David Haye’. Where is he now? He said he wanted to fight me, I agreed the money, I agreed everything in December.

Chisora leaves his seat and approaches Haye at the back of the room, where a melee ensues. Haye at one point picks up a video camera tripod and swings it.

The two are eventually pulled apart before Chisora returns to the front of the room.

Chisora: (Referring to Booth’s cut) I’m sorry about that. Adam, your fighter glassed me.

Booth: I want to know who glassed me.

Chisora: As you were trying to hold your fighter away, he [Haye] probably glassed you by mistake.

Booth: You hit me with a bottle.

Chisora: David had a bottle in his hand.

Booth: Vitali, you are a great fighter but your manager is an embarrassment to the sport. Congratulations for winning.

Chisora: (Addressing Booth) Either we do it in the ring or outside of the ring. Because I want him. If David don’t fight me, Adam, I am telling you the God’s honest truth, I am going to physically burn him. So you tell him I said that. I am going to find him.

Chisora was subsequently detained (but not arrested) by German police at Munich airport, and released without charge several hours later. The police are still looking for David Haye, who has apparently disappeared, no doubt not wishing to be “shot and burned”.

Chisora’s manager and promoter Frank Warren has defended his fighter although hasn’t condoned his actions, which from slapping Vitali at the weigh in, spitting water over Wladimir in the ring to brawling with Haye have been excentric in the least. 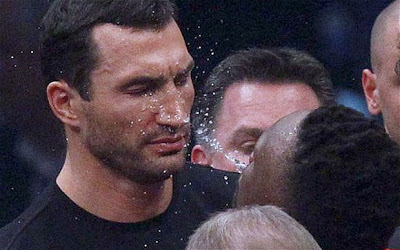 The BBBC have got in on the act and apparently intend to withdraw Chisora’s license pending an investigation. Anyone wondering why they have not threatened the same action toward Haye, the answer could be that Haye doesn’t actually have a license at the moment.

UK fight fans would no doubt prefer to see Haye and Chisora go at it even more than Haye v Vitali or Chisora v Wladimir. There is a certain validity to a fight between the two Brits – Chisora has actually lost three of his last four fights, and Haye seriously underperformed in his title losing effort last July, so the winner would be far more deserving of a tile shot than either man currently is.

If Bernd Boente has his way, neither Haye nor Chisora will be challenging for a version of the heavyweight title anytime soon, but after the dramatics of the weekend, neither man will need to look too far for their next big payday.