Home Archive David Price Proves He Is Britain’s No.1 Heavyweight! 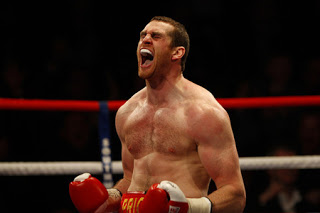 Price demolishes McDermott in one!

Local hero David Price knocked out former British heavyweight title challenger John McDermott in just 73 seconds at Liverpool’s Olympia on Saturday night,
establishing himself as the premiere heavyweight world title threat in the UK. Tyson Fury may be the British and Commonwealth champion and hold a WBC world ranking, but the truth is if these two meet in what would be an enormous money spinning domestic matchup this summer – based on his sensational performance vs McDermott – Price would deservedly start as the bookies favorite.

The bulky McDermott [271 lbs] came straight at Price, looking for a repeat of his crushing first round victory over another top UK prospect – Larry Olubamiwo last year, and immediately tried to land with his big left hook. However, Price smothered his attack and then used his own 246 lb frame to shove McDermott across the ring. The Londoner launched another attack but was caught flush with a vicious right uppercut that put him down for him for the first time. Two more knockdowns followed in quick succession, and although McDermott appeared to have beaten the count after climbing off the canvas the third time, referee Howard John Foster chose to wave the fight off.

The 6’8″ 28-year-old Price [12-0, 10 KOs] – a bronze medalist in the super heavyweight category at the 2008 Beijing Olympics – has made incredible progress in his last three fights – demolishing one time American hope Raphael Butler in less than 2 minutes, stunning fellow British prospect Tom Dallas in two rounds, and now his sensational destruction of a focused and still dangerous John McDermott. 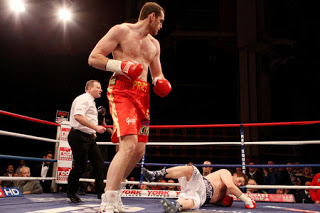 So just how good is David Price? In short – very good indeed. His jab and right cross are world-class, his work ethic is reflected in his outstanding physical conditioning which is Klitschko-esque. Price has proved he is prepared to learn his trade the old-fashioned way, and has traveled around Europe to spar with both of the Klitschko brothers – WBA/IBF and WBO champion Wladimir and WBC title holder Vitali, ex-WBA king David Haye, one-time WBC number one contender Odlanier Solis and many other top rated heavyweights.

Tyson Fury [17-0, 12 KOs] is five years Price’s junior at 23, and an inch taller at 6’9″. Fury’s physical conditioning and boxing ability have often been called into question, although he has made great improvements in both in the last 18 months. Fury had two nightmare encounters with McDermott, winning the first on a controversial decision in September 2009, and stopping McDermott the following year in the ninth round when clearly behind on points.

At his best, when he is making full use of his enormous size, Fury is without doubt an extremely effective fighter. His standout victory was a comfortable 12 round decision over Derek Chisora for the British and Commonwealth titles last July. Fury dominated the fight with his pole-like left jab and stiff right cross, and nullified Chisora’s attacks with clinches when his opponent got in close.

Right now, Price looks a class above Fury, and the hulking Manchester traveler’s susceptibility to a straight right hand must be a major concern to his manager Mick Hennessy. Fury has enjoyed all of the physical advantages over his opponents so far in his career, but in Price he would face a man as big as he is but will be in better physical condition, is a far better boxer, faster puncher and a harder hitter.

Ultimately, Tyson Fury may choose not to risk his WBC no.7 ranking, and may instead choose a different route toward a shot at one of the Klitschko brothers within the next couple of years. If so, Price could instead target European champion Robert Helenius, the WBO’s number one contender. Helenius won an extremely dubious decision over Derek Chisora last time out, and although tall and hard punching, he is far from the physical specimen that Price is. A victory over a man who holds wins over former heavyweight champions Samuel Peter and Siarhei Liakhovich would establish Price even more as a genuine world title threat than a victory over Fury.

No matter which path he chooses to take, David Price today looks to be the number one threat to the Klitschko’s domination of the heavyweight division, and could well go on to become the first British undisputed heavyweight champion since Lennox Lewis.