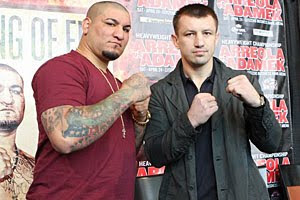 The April 24th punch-up between top-ten contenders Tomasz Adamek and Chris Arreola looms as potentially THE thriller in the heavyweight division for 2010.

It´s a mouthwatering clash that pitches 28 year old Arreola´s bulk, brute force and power, against 33 year old Adamek´s Eastern European technique and precision. Both men are as tough as they come. Both have strengths, and weaknesses.

There is no feasible way that either man will emerge from this war quite the same as he entered it.

And that´s exactly why David Haye must meet the winner. Granted, Haye has the little matter of his mandatory defense of his WBA heavyweight title against John Ruiz on April 3rdto take care of. Unlike some, I don’t believe Ruiz will pose any kind of threat to Haye, and I will be surprised if he is still standing after the third round.
But back to Adamek v Arreola.
Polish born, but now New Jersey based, Tomasz Adamek (40-1, 27 ko´s) is a former WBC light-heavyweight champion, and also a former IBF cruiserweight title holder. He made his heavyweight debut last October when he battered what was left of fellow Pole Andrew Golota to defeat in five rounds. In February he defeated cagey fringe contender Jason Estrada on points over twelve rounds. It was an impressive, workmanlike performance by Adamek, who carried a rock hard 220 lbs on his 6´2´´ frame. His speed and work-rate showed no signs of diminishment since his cruiserweight days, and he finished the fight as strongly as he began it. Estrada was in the shape of his career for the bout, and indeed needed to be just to survive the twelve rounds.

Chris Arreola (28-1, 25 ko´s), a hulking 6´4´´ and 260 lbs, hails from Los Angeles, California. Arreola´s sole defeat was sustained last September, when as the WBC´s no.1 contender, he challenged their heavyweight champion Vitali Klitschko for his crown at the Staples Center in LA.

Once the fight began, it wasn’t long before Arreola discovered what all of Klitschko´s opponents have learned; that the 6´8´´ Ukrainian is damn near impossible to hit, and at the same time exceptionally good at delivering blows to his opponents head, using a multitude of angles to do so. The punches may not always be knockout-drops, but when delivered by a 250 lb man, at speed and with relentless consistency, the result is an accumulative pulverization, like a skilled butcher using a steak mallet on a tough piece of beef.

The pattern of Klitschko v Arreola was set very early in the fight, with Arreola marching bravely forward and tacking a leathering in the process. Arreola proved two things that night; the size of his heart, which is a big as his body, and the strength of his chin. His corner pulled him out after ten one-sided rounds leaving Arreola weeping uncontrollably.

Adamek hits hard, though his blows don´t carry the weight of Arreola´s. He is going to have to throw a lot of punches just to keep Arreola at bay. And when a fighter throws punches, he leaves himself open to counters. Both men have granite jaws, and although both can punch, neither man possesses the kind of lights-out power of a Tyson or a Foreman, so there are going to be a lot of punishing exchanges between these two. This will ultimately be a war of attrition – it will be ´kill or be killed` – it will be ´last man standing.`

And I can´t wait!

Here are some of the comments that emerged from the fights promoters and the fighters themselves following the confirmation of the fight;

Kathy Duva (Adamek’s co-promoter): “You’re going to see both of them giving 1,000 percent. One thing I can say is that anybody who watches this fight on April 24 is going to be happy they did, and anybody that didn’t is going to be kicking themselves the next day.”

Adamek: “Fighting Chris Arreola will prove that nothing can stop me from reaching my goal to become heavyweight champion of the world. I’m always ready to deliver a great fight, and I’m convinced that with Chris’ very entertaining, no-holds-barred style, on April 24 we will deliver a heavyweight classic. I will not run from Arreola. I will be easy to find in the ring, if he wants to find me. Why should I exchange punches with Chris when I can make him miss and then hit him? Whatever works for me on that day I will do. I am fighting for the fans. Without fans, there is no point in going into the ring. [We have] a guy like Chris Arreola, who goes forward and is relentless. And everybody knows me: I love to punch people in the mouth; there’s nothing wrong with this. I mean, this guarantees a great fight, and this is a fight that HBO and the fans wanted for a long, long time. If I were to fight somebody boring, there would be seven fans in the stands. No point.”

Arreola: “I don’t like to fight — I love to fight! I love hitting people; that’s my passion. Me and Tomasz Adamek on April 24 are gonna go in there and beat the crap out of each other. I’m gonna try and knock his head off and he’s gonna go in there and try and knock my head off. I believe it can be a great fight. I respect him as a fighter. I respect him as a man. But come April 24, I’m gonna come out of there with my hand raised. It’s a boxing fight, man. It’s a chess match. He’s gonna try to catch me, I’m gonna try to catch him. I’m gonna find some openings, just like he’s gonna find some openings. But I believe my punches are more effective than his. I’m a natural heavyweight. I became a heavyweight because of Coronas and burritos. That’s the truth. But I’ve been a heavyweight for 29 fights. That’s the way I see it.”

Technically, David Haye (23-1, 21 ko´s) is already a better fighter than either Adamek or Arreola. He would start as a favorite if he were to meet either man right now. But that doesn’t mean that Haye couldn’t lose to either man – he could. Haye is yet to prove that he can take a heavyweight punch, and he is yet to prove that he can fight at an intense pace for twelve rounds.

But what would give Haye the edge over either man would be this; both Arreola and Adamek don’t mind taking shots to land their own. They both have great chins, and warrior mentalities. Those tactics just wont work against Haye, who doesn’t just hit with concussive power, but also with precision and skill, and who may ultimately prove to hit just as hard as IBF champion Vladimir Klitschko, currently the hardest puncher in the heavyweight division.

And that my friends is seriously hard!