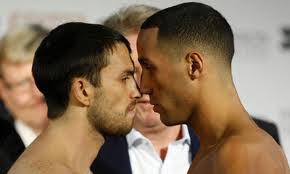 Britain’s Olympic Golden Boy James DeGale faces his toughest test to date when he attempts to take the British Super middleweight title from Liverpool’s Paul Smith in front of his hometown fans at the Echo Arena this Saturday night.
The fight is part of Sky Sports ‘Brit Pack’ package of title fights. Live action starts at 8pm on Sky Box Office.

The cocky, confident and outspoken DeGale has divided both public and press since turning professional, though his talent is undeniable. Saturday’s clash with tough, hard hitting warrior Smith is an intriguing clash of both styles and personalities, and could result in the domestic fight of the year.

24 year old DeGale (8-0, 6 ko’s) won Gold in the middleweight class at the 2008 Beijing Olympics. After signing promotional contracts with Frank Warren worth a rumored 1.5 million pounds, DeGale turned pro in February 2009 with a four round decision over Georgian Vepkhia Tchilaia.
DeGale was unfairly booed that night by some quarters of the crowd for his understandably cautious performance against a seventeen fight veteran with a winning record.

Since then, DeGale’s critics have had little to complain about, as he delivered a succession of increasingly impressive performances – stopping Dudley prospect Sam Horton in five rounds in May to win the WBA International title in only his seventh fight, and leveling Liverpool’s tough Carl Dilks in one round to retain the title in September.

This writer initially believed that it would take DeGale the standard four to five years to be ready for a world title fight, but his progress has been so rapid that under any other promoter than the famously cautious Frank Warren, DeGale would be fighting for a world title in 2011. Even Warren may find it hard to satisfy his exciting young charge with a diet of domestic and European title fights.

DeGale is a southpaw who likes to switch-hit (go from southpaw to orthodox and back again at will), and possess the kind of God-given movement and timing that cannot be coached, allied with world class punching power. Britain has a clutch of exciting up and coming talent at the moment with the likes of Nathan Cleverley and Kell Brook at the helm. DeGale could be the best of the lot.

Liverpool’s 28 year old Paul Smith (29-1, 15 ko’s)) began boxing at the age of nine and was a UK schoolboy international. In the 2002 Commonwealth Games in Manchester, Smith took silver in the light middleweight class, losing to current WBC light heavyweight champion Jean Pascal of Canada in the final on points.

Smith turned pro in April 2003 under the promotional banner of Frank Warren and stormed through his first 23 opponents without defeat before dropping a ten round decision to Coventry’s Steven Bendall, a European and British title challenger, in June 2008.

The Bendall loss proved to be only a temporary derailment, and Smith was back to winning ways just three months later. Four straight victories put him into a title shot against fellow scouser Tony Quigley for his British super middleweight title in October 2009.

In a thrilling ‘barn-burner’ of a fight between two evenly matched boxer-punchers, both with their own vociferous supporters creating an unmatchable atmosphere at Merseyside’s Echo Arena, Smith edged Quigley via a twelve round split decision.

In his last fight in March of this year, Smith defended his title against yet another scouser, former champion Tony Dodson. Smith won a tough but unanimous decision over twelve rounds, but suffered cuts to both eyes in the process. The severity of the cuts have kept him out of the ring for almost ten months. Despite the enforced layoff, Smith was supremely confident in a press interview:

“If DeGale is stupid enough to stand and open up as his ego suggests, he’ll get wiped out early.” he said. “I see this as like when Haye fought Thompson too early in his career and got stopped and the later the fight goes, the more it will favour me. Of my 15 stoppages almost all have been on the deck, about 10 have been ‘out’ and a few have been oxygen jobs.”

DeGale was his usual eloquent self in an interview earlier this week:

“Winning on Saturday will give me a world ranking. There’s no pressure on me at all, he (Smith) is the one under pressure,” said DeGale. ”For the first time as a professional I’ve got no pressure. He’s got the world ranking, he’s boxing in his home town. I’m just a cocky little prospect coming through. The last time I had no pressure was in Beijing, when I proved people wrong and won a gold medal.”

Regarding the boxing experts and fans who think the fight against Smith has come too soon, DeGale said:

“Some of these guys really think he’s going to beat me. In my mind it is not a 50-50 fight but to the general public it is, they’re asking ‘can James DeGale do this when he’s only had eight fights?’ That’s what I enjoy and I’m just going to be laughing at him after I’ve knocked him out. This puts me on target for where I want to be. I wanted to be fast-tracked because I know how good I am and where I’m going, and after I’ve won this I want to be fast-tracked even more. Ugly Kid (DeGale’s nickname for rival, West Ham’s George Groves) is getting it next but apart from that, give me 18 months and I’ll be boxing for a world title after this.”

Smith is ranked 4th in the world by the WBO, 9th by the IBF and 7th by the WBC. The super middleweight division is the toughest in boxing, and possesses fearsome strength in depth, boasting world class stars like Andre Ward, Carl Froch, Lucien Bute, Andre Dirrell, Arthur Abraham, Mikkel Kessler and Kelly Pavlik.

The current WBO champion, Germany’s Robert Stieglitz, is considered to be by far the most vulnerable of the title holders. Paul Smith is undoubtedly risking his lofty WBO world ranking taking on DeGale, and one has to wonder who has advised him to take such a risky fight when a world title fight could have been his next year.

If both men bring their A-games to the ring on Saturday, and Smith’s eyes hold up, it could be the UK’s fight of the year, and Smith might just have enough to take it. However, I feel that the enforced layoff , and possible subsequent lack of lengthy intense sparring may count against Smith. DeGale is supremely confident, and already looks world class. Smith will find himself caught time and again with thunderous counters as he tries to catch an opponent who is extremely hard to nail. Smith has said he intends to start fast, and there will be some thrilling exchanges early on, but by the middle rounds DeGale will be in control. Around the eighth round, Smith will be taking a battering, and the referee will have no choice but to step in.

DeGale by TKO in eight rounds.