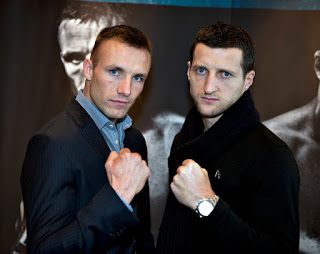 Nottingham´s WBC super-middleweight champion Carl Froch has started the verbal sparring ahead of his April 24th clash with Mikkel Kessler at the MCH Messercenter in Herring, Denmark.
With rumors that Kessler struggled to make 168 lbs for his last fight, a technical decision loss to American Andre Ward last November that cost the Dane his WBA title, Froch has come out swinging;
“I never get too heavy before a fight, about 12st 7lb tops. I am walking around at about 12st 2lb, 12st 3lb and I think it is important to be on the weight and training and performing at the weight you are going to fight at.” said 32 year old Froch (26-0, 20 ko´s).

”It is pointless coming in at 13 stone at six to eight weeks before hand, ask your body to take a stone off and then fight for 12 rounds. It is hard, hard work and too much for the body so I have the discipline that I am a 12-stone fighter. I train, spar and fight at 12-stone. That’s how I am, I am a very consummate professional and strict with my diet. I eat well, I have the Eastern European gene, my grandparents are Polish. So that helps with the weight-making, genetically I am gifted in that area.”

Froch´s fight with 31 year old Kessler (42-2, 32 ko´s) will the third defense of his WBC title. He won the crown in December 2008 in a war against Haitian born Canadian Jean Pascal, the current WBC light-heavyweight champion. He retained it last April with a twelfth round knockout of Jermain Taylor, a fight Froch was losing badly on points. In his last bout, Froch beat previously undefeated American Andre Dirrell in controversial circumstances in Nottingham, in what was Froch´s opening match in the round-robin stages of Showtime TV´s Super Six World Boxing Classic.

“It is all about getting myself into super fit shape, from my long-distance runs, my short runs and my sparring. There is a fine line because if you spar too heavy and too much, you end up with injuries. I banged my elbow and there is swelling and quite a bad bruise. I couldn’t straighten my arm but this week I can get back on it. You have to be careful.”