Home Archive Carl Froch: The champion nobody wants to know 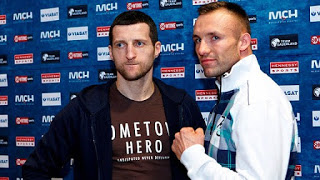 Carl Froch is covering smooth circles in the Nottingham ring trying his hardest to find a true line for his punches and a reasonable line for his words.
It is not easy, as good as he looks; a fighter in his element, moving menacingly through his preparations for tonight’s contest.
In Herning, a small Danish town near Legoland, Froch will defend his World Boxing Council super- middleweight title against Mikkel Kessler as part of the unique Super Six tournament. It is also the latest instalment – the latest brick in the wall – of Froch’s battle for recognition, one that has proved frustratingly slow since he won the title two years ago.

“I’ve had the bad luck to turn into a world champion during a recession,” says Froch. “The men and women in charge at TV companies don’t want to gamble, they want to back the winner after it has won – well, I’m a winner. Perhaps it has something to do with boxing being a working-class sport. I know the TV companies need to be braver. It’s a disgrace that my fights have struggled to get on TV.

“I’ve got to try and not sound bitter about the situation and that is not easy. There are other British fighters getting Sky pay-per-view and I have nothing against them, but what about me? I’ve done all that I could do, beaten top fighters and been in entertaining fights. I just have to keep winning, and winning in style.” So far he is unbeaten in 26. read more