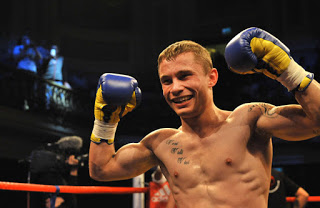 The powerfully built Frampton is one of the most promising boxers to come out of Northern Ireland in many a year, and is managed by the country’s biggest ever boxing star – Barry McGuigan. The 5’11” Hughes is no slouch however, and will enjoy a six-inch height advantage over the champion. The only loss on Hughes’ record was a close decision defeat against fellow Scot Jamie Arthur in 2010.

Frampton vs Hughes looks to be a classic matchup between the short, powerfully built slugger and the rangy, skillful boxer, and could be an outstanding early season encounter, with the winner gunning for a crack at British champion Scott Quigg or European title holder Kiko Martinez. Frampton v Hughes will be screened live on Sky Sports 1, the action begins at 9 PM.

24-year-old Frampton [11-0, seven KOs] was an outstanding amateur for Northern Ireland, winning over 100 bouts and losing just eight. He was a multiple Irish national champion, and a silver medalist in the 2007 European Union Amateur Boxing Championships.

Frampton turned professional in June 2009 under the watchful eye of manager – former WBA featherweight champion and Irish boxing legend Barry McGuigan. Frampton has progressed smoothly against a diet of solid opposition. In December 2010 Frampton stopped Gavin Reid in two to win the Celtic super bantamweight title, his first scheduled 10 rounder. He defended that belt last July with a 10 round decision over Welsh prospect Robbie Turley.

Last time out, Frampton powered his way to a fourth round TKO over Australian Mark Quon to win the vacant Commonwealth super bantamweight title. The Irishman is a squat, powerful looking figure that packs a lot of muscle on his short frame. He is somewhat limited by his 62” reach, but makes up for it with excellent speed and reflexes.

Frampton’s opponent on Saturdayy night will be Scotland’s 24-year-old Kris Hughes [15-1, one KO], another talented UK youngster with ambitions of getting to the top. Surely one of the tallest super bantamweight’s on the world stage at 5’11” and a southpaw to boot, Hughes turned professional aged just 17 in October 2006, but fought just three times between 2006-2008, and his career didn’t really take off until 2009 when he fought seven times, including a first-round stoppage over the dangerous Welshman Dai Davies and an eight round decision over the tricky Youssef Al Hamidi.

In October 2010, Hughes lost a close 12 round decision to Jamie Arthur in a fight for the vacant Commonwealth super bantamweight title. There was no disgrace in losing to Arthur who had been a top British prospect earlier in the decade after winning a Gold medal in the 2002 Commonwealth games in Manchester, and was on a successful comeback that had included ending the unbeaten run of the highly touted Akaash Bhatia the year before. Arthur is scheduled to fight British champion Scott Quigg on February 4th.

Since the loss to Arthur, Hughes has bounced back successfully, scoring three wins in 2011 including a 10 round decision over James Ancliff for the Scottish Area featherweight title. Although 126 lbs would seem to be better suited to Hughes’ beanpole-like frame, he clearly believes that he has the beating of Frampton who he claims has boxed nothing but ”bums and journeymen”, and jumped at the opportunity to fight for a major title.

The super bantamweight class is particularly buoyant in the UK, with British boxers holding six of the top 10 slots in the current E.B.U rankings [Spanish slugger Kiko Martinez is the current champion.] Rendall Munroe remains highly ranked in the world, and British champion Scott Quigg was one of the success stories of 2011.

Carl Frampton looks to have the talents and the tools to become one of the best super bantamweights in Europe. Whether he can fulfill his potential and become a world champion remains to be seen in a division where the outstanding Cuban Guillermo Rigondeaux has just become WBA champion, and will soon see the debut of budding superstar Nonito Donaire.

Of course Hughes’ sheer physical advantages give him an outside chance of pulling off an upset. If he can keep the Irishman on the end of his southpaw jab for twelve rounds, a shock result could be on the cards.

Nevertheless, Frampton should have way too much power for Hughes on Friday. It would be a victory of sorts for the Scot if he could last the distance against the Irishman, but I cannot see him keeping Frampton at bay for 12 rounds, and I think by round eight Frampton’s bombing attacks to the head and body of Hughes will force the referee to intervene.

Frampton by TKO in eight.