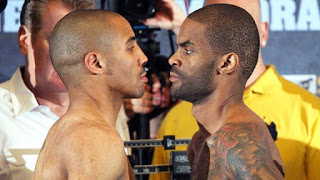 when he meets dangerous punching Allan Green at the Oracle Arena in Oakland, California, on Saturday night. The fight is the latest installment of Showtime TV´s compelling and exciting Super Six World Boxing Classic, where six of the worlds outstanding super middleweights are pitted against each other in a tournament designed to find the best 168 pounder on the planet. The other fighters in the line up are Andre Dirrell, Carl Froch, Mikkel Kessler and Arthur Abraham.

New arrival Green is no slouch, and is currently ranked 4th by both the WBC and WBA, and 2nd by the WBO. He gained entry into the lucrative Super Six tournament when Jermaine Taylor withdrew following back-to-back knockout losses to Carl Froch and Arthur Abraham. Green was initially considered to start the tournament, but was passed over in favour of Dirrell and Taylor.

In a press conference this week, 30 year old Green (29-1, 20 ko´s), a native of Tulsa, Oklahoma, spoke of his initial frustration of being left out of Super Six, and his upcoming bout with tournament favorite Ward.

“I think I belonged in the tournament originally,” said Green. “I’ve been in the top 10 for the last 4 1/2 years. I felt like I was among the best and – the show me and Jermain Taylor fought on, I won and he lost. He got rewarded and I got pushed back.”

The show Green was referring to was the April 25, 2009 card at the Foxwood´s Casino in Connecticut when Taylor suffered a 12th-round knockout against then WBC super middleweight champion Carl Froch and Green knocked out Carlos De Leon Jr in the second round. On the subject of WBA champ Ward, Green said;

“Ward is a good young boxer, but he still has to learn how to fight. He has decent speed, but he’s never really fought a guy with boxing skills. He’s fought guys who come right at him. He can pick ’em apart, pick ’em apart, and wear ’em down. But in me, he’s dealing with a totally different animal. He’s looking at a guy with strength, speed, size and power, and I have more experience than he does.”

Ward looked sensational last November dismantling the pre-tournament favorite Mikkel Kessler over eleven one sided. However, Green was dismissive of Kessler´s credentials as a great fighter.

“He’s (Kessler´s) got boxing skills — for Denmark. Truth is, if Kessler was brought up here (in the USA), with the kind of guys you run into over here, he would’ve probably had two or three losses before he even got to a title. I’m not saying Kessler’s not a good fighter, but it’s a totally different type of competition over here as opposed to European guys.”

Although the super middleweight division has been dominated by ”European guys” for the last decade, Green continued to dig himself further into the anti-Kessler, anti-Denmark hole he had started;

“He’s desperate to win it, and I’m desperate to keep it, so you got two desperate men in the ring. That’s the beautiful thing about this sport. It’s not a team sport. You can’t blame our team, you can’t make excuses about anything. It’s him versus me. And the whole world gets to see what happens. If Allan Green beats me, I’ll take my hat off to him. I don’t make excuses. And I expect the same from him if I beat him. What I’m prepared for is a dogfight.”

Allan Green no doubt presents a dangerous opponent for the charismatic, flashy Ward. Both fighters stand 6’2” and are big, strong 168 pounders. Green possesses devastating power in his left hand, via the hook or the uppercut. His 2005, 18 second win over previously unbeaten Jaidon Codrington was The Ring Magazine´s knockout of the year. Last year he destroyed tough Puerto Rican Carlos De Leon Jr in just two rounds, scoring four knockdowns.

Boxer-puncher Green´s only pro setback was a March 2007 ten round points defeat to a peak form Edison Miranda in the Colombian´s adopted homeland of Puerto Rico. Despite fighting at light heavyweight up to that point, Green took the match against the powerful Miranda at 162 lbs, just above the middleweight limit, and although he floored the Colombian in the eighth, was out muscled and outworked throughout the contest. In the tenth, Miranda floored Green twice and the American only survived suffering a knockout by one second.

Green has won six straight since the Miranda loss, his most noticeable victory being a unanimous decision over previously unbeaten contender Tarvis Simms last October. Now comes Super Six and his WBA title shot against Ward.

Andre Ward appears on the verge of becoming a genuine boxing superstar. His Olympic gold medal, engaging personality and exciting fighting style could make him the Sugar Ray Leonard for this millennium.

After turning pro in December 2004, Ward was brought along on a diet of solid if nonthreatening opposition, and by the time he met the aforementioned Edison Miranda in May 2009, Ward was 18-0, but his record was more like a ‘Who´s He?’ than a ‘Who´s Who’ of boxing.

Nevertheless, Ward proceeded to give the muscular Colombian a boxing lesson, winning by a unanimous decision and earning himself a berth in Super Six.

When Ward began the competition with a match against Mikkel Kessler, he faced a hard hitting two time WBA champion who´s only loss in 43 fights had been against Joe Calzaghe. Kessler has since proved with his victory over Carl Froch that he is still an excellent fighter, yet on the night Ward was a revelation, dominating his opponent throughout and consistently beating him to the punch. When a clash of heads left Kessler unable to continue with a badly cut eye, the fight went to the scorecards, and Ward was awarded a unanimous decision and the WBA title. Ward´s performance against the man who had been widely tipped as the pre tournament favorite had been so impressive that it was the young Californian who assumed the mantle of being the man to beat to win the competition.

Can Allan Green beat Andre Ward? In a word, yes; Green´s left is a truly potent weapon, and if he catches any opponent with full power, the fight will be over.

Will Green beat Ward? No. Ward is an exceptionally intelligent boxer who will know exactly how to neutralize his opponent´s most dangerous asset, just as he avoided Kessler´s powerful straight right last November.

After points decisions over Miranda and Kessler, Ward may be looking to up the ante somewhat with a spectacular performance against Green, and I´m looking for Ward to spend the first few rounds feeling Green out and avoiding his big left, then moving in for the kill.

Miranda showed that Green can be hurt, and almost knocked him out. Ward will go one step further.

Ward by TKO in eight.