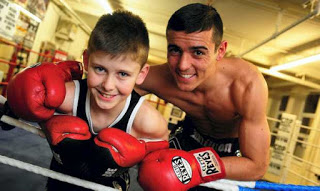 Liverpool’s John Watson will have home advantage for his second attempt to win the British lightweight title when he takes on Manchester’s Anthony Crolla at the Olympia, Merseyside, this Saturday night.

Last November Watson was TKO’d in eleven sensational rounds by former world champion Gavin Rees in his first attempt to win the title. He was due to meet the Welshman in a rematch this Saturday, but Rees pulled out of the fight two weeks ago to have surgery on a nose injury. Crolla, a top raked super featherweight, jumped at the opportunity to fight for the vacant title. The fight will be shown live on Sky Sports 1, action starts at 9 pm.

27 year old Watson (13-1, 5 ko’s) turned pro in March 2007 following an extensive amateur career that saw him win 64 out of 78 bouts. Junior ABA lightweight champion in 2002, Watson followed that by taking the senior title in 2004.
He was Amir Khan’s chief sparring and training partner for the 2004 Olympics in Athens. When Khan turned pro in 2005, Watson assumed his position as Britain’s no.1 amateur lightweight.

In what turned out to be a baptism of fire for the young man from Liverpool, Watson looked completely out of his depth against betting favorite Rees for the first five rounds as the pugnacious Welshman, who’s only defeat in 34 fights had been against the highly rated Ukrainian Andriy Kotelnik in a WBA title fight in 2009, bullied him around the ring, scoring with heavy hooks to the head and body.

However the thirteen fight novice survived, and in the second half of the fight began to turn the tide with an excellent display of boxing. By the tenth round the momentum had turned completely in Watson’s favour, but just when it looked as if Rees was out of ideas, he came up with a halleluiah of a left hook to flatten Watson.
The Liverpool fighter beat the count and managed to survive the round, but was clearly badly stunned. When Rees caught him again with a barrage of punches in the eleventh round, referee Victor Loughlin decided he had seen enough and stopped the fight.

Jut how much such a crushing defeat has taken from Watson’s confidence remains to be seen, and in a pre-fight interview earlier this week, he preferred to talk about the job at hand rather than the past:

“It is going to be a good fight. Home advantage is a big plus for me but he has already been in training for a tough fight with Carl Johanneson. He will be ready for this. I have just got to keep my game plan up and not let him get in the fight. He’s a busy fighter so I must match him but I’m just focusing on getting my plan right.”

“With me having the extra size on him and the extra weight, I think I will be naturally the physically stronger and the more powerful.” said Watson. ”I have sparred Anthony a couple of years ago so know what he is about. I’ve watched his last couple of fights and he has improved throughout the year and since he fought Gary Sykes.”

24 year old Anthony ”Million Dollar” Crolla (19-2, 7 ko’s) turned pro in October 2006 after lifting the 2006 ABA lightweight title. After stopping five of his first eight opponents, Crolla had his progress briefly derailed when he dropped a decision to tricky journeyman Youssef Al Hamidi – the Dewsbury based Syrian – in April 2008.

Crolla bounced back to score five straight wins including a comprehensive thrashing of Hamidi in a rematch, and in May 2009 met fellow prospect Gary Sykes in a British super featherweight title eliminator.

In a minor classic, Crolla and Sykes fought a sensational, see-saw encounter that saw both men throw just short of 1000 punches during a frenetic ten rounds. At the end of the bout, referee James Davies decided that Sykes had done just enough to take the decision, but Crolla had emerged from the bout a much improved fighter.

Lean and rangy at a shade under 5′ 9”, Crolla has all the tools to be a genuine star in British boxing. He is a smooth boxer with a high work rate who can bang a bit, has a great chin and is cool under pressure.

Crolla was all set to meet former British champion Carl Johanneson in a super featherweight title eliminator when he got the call to fill in for Gavin Rees against Watson. Although victory over Johanneson would have given him the opportunity of revenge over Gary Sykes who is currently British super featherweight champion, Crolla, who is managed and promoted by Ricky Hatton, jumped at the opportunity to fight for a British title.

As Hatton Promotions director of boxing Richard Poxon said: ”It is a fantastic opportunity for Anthony and one he didn’t hesitate to accept. Of course, he would have got a shot at the British super-featherweight championship if he defeated Carl, but this is a job he really fancies.”

So who will emerge victorious on Saturday night? The bookies are leaning slightly toward Watson, and have the Liverpool fighter a 4/6 favorite, with Crolla at 6/5 bet365.

At 5’10”, the same height as his old friend Amir Khan, Watson is freakishly large for a lightweight, with fast hands and an aggressive boxer-puncher style. However, with just five stoppage’s from his thirteen wins, he has not yet developed the kind of KO power his physique would seem to merit. That lack of a big punch proved his undoing in his fight against Rees, when the Welshman looked there for the taking but Watson couldn’t put him away.

Crolla had to absorb some heavy shots in his war with Sykes and wasn’t found wanting. Can he go one step further and guts out a win over a man who will have all the physical advantages over him, has the experience of a British title fight, plus hometown advantage?

I think Crolla can, and will. In this writer’s opinion Crolla will be just too slick for Watson, and I see him getting off to a fast start and building up a strong lead before Watson makes a late round comeback. Crolla will hang on to take a unanimous decision and with it the British lightweight title.