Home Archive Callum Smith Crushes Rocky Fielding In One Round 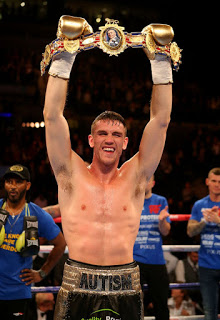 Liverpool’s Callum Smith looked sensational as he demolished Rocky Fielding inside a round in a clash between undefeated scousers for the British super middleweight title at the Echo Arena in Liverpool on Saturday night.

Callum became the fourth member of the illustrious Smith family to win a British title, and as the WBCs no.1 contender he will now look forward to a world title shot in 2016.

25-year old Smith (18-0, 13 KOs) surprised his rival with the speed of his attack and he had Fielding on the canvas within the opening 30 seconds. The 6’3″ Smith – who had stopped eight previous opponents in the first round – went looking for the big shot that would end the contest,  but Fielding covered up and smothered his attack and appeared to have weathered  the storm.

28-year old Fielding then attempted to take  the fight to Smith and appeared to rock his rival momentarily, but within moments of this fleeting success brief success he was on the canvas for a second time, courtesy of a counter hook.

With the clock counting down to end the pending round, Smith put his foot on the gas, and a volley of shots floored Fielding for a third time, and although Rocky beat the count, referee Phil Edwards had seen enough and stopped the contest with 15 seconds remaining of the first round. Fielding saw his record slip to 21-1 with 12 KOs.