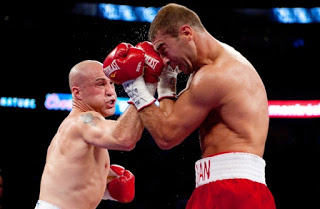 Undefeated IBF super middleweight champion Lucien Bute retained his title for the sixth time with a 9th round TKO over game challenger Jesse Brinkley.
Frequently, there’s a silver lining in everything. And so, trainer Stephan Larouche was willing to take a philosophical approach on Saturday, knowing his pre-fight prediction was alarmingly incorrect.
“If he would have beaten him in two or three rounds,” Larouche told montrealgazette.com, “people would have said he fought a nobody.”

Larouche had predicted that Jesse Brinkley would fail to survive four rounds against Lucian Bute. Instead, it took almost nine full rounds Friday night at the Bell Centre before Bute stopped Brinkley. It was well after midnight before Brinkley, the mandatory challenger, was stopped via a technical knockout at 2:48; Bute retaining his International Boxing Federation super-middleweight championship for the sixth time before 11,682 spectators.

Brinkley, now 35-6, was stopped by a left uppercut, falling for the third time in the bout. Brinkley, 34 next month, had his first crack at a title since turning pro in 1997. Bute improved to 27-0, with 22 knockouts. read more