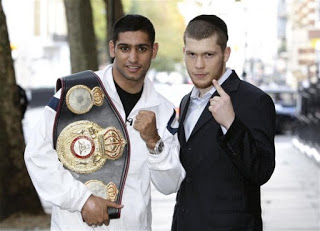 Bolton´s Amir Khan makes the first defense of his WBA light-welterweight title on December 5th at Newcastle’s Metro Radio Arena.
His opponent will be the official WBA number one contender, 27 year old Dmitry Salita. 22 year old Khan (21 – 1, 15 ko´s), is one of the brightest stars in British boxing. But what do we know about his opponent?
Like Andriy Kotlenik, the man Khan defeated to win the world crown in July, Salita is a Ukrainian. His family moved from Odessa to Brooklyn when Salita was nine years old, to escape the escalating violence against Jews. He began boxing at thirteen, training at the Starrett City boxing club, frequented by Zab Judah, among others. He compiled an amateur career record of 59-5, culminating in winning the 139 lb class at the New York Golden Gloves in 2001. He turned pro later that year, and is managed by Bob Arum.
Salita has fought exclusively in the US, and is unbeaten in thirty one fights (16ko´s, one draw). However since turning pro the record Salita has compiled reads more like a ´´who´s he?“ than a ´´who´s who“ of boxing. The WBA are a notoriously political organization, and one can only wonder if Salita´s lofty position in the rankings is down to Bob Arum. Manny Pacquiao, the finest fighter in the world today, is the WBA´s number two contender, behind Salita. Make of that what you will.
So does the Brooklyn based Ukranian have a prayer against Khan? Well he certainly talks a good fight. Citing Khans devastating first round knockout loss against Colombian Breidis Prescott in 2008, Salita says: “His chin is definitely an area of vulnerability. It’s not just because of Prescott that he’s vulnerable. He has been knocked down a whole bunch of other times.”
The ´´whole bunch of times“ Salita is referring to were a knockdown each against Willie Limond and Michael Gomez, both rated punchers. “He definitely has a seed of doubt because of the Prescott defeat,” Salita continued.
“Making the move to Freddie (Freddie Roach, Khan´s trainer) was a smart move and helped him win the belt but I’m going to go in there to do my work and eventually he is going to get hit on the chin.”
Salta is an aggressive boxer-puncher, who lacks genuine knockout power. He likes to get up close and mix it up. And he sounds tailor made for young Amir.
BIG FIGHT ODDS; KHAN 1/9, SALITA 5/1 bet365