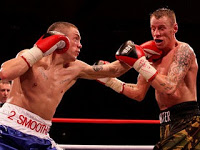 Frank Maloney will hope to stage the rematch between Jason Booth and Matthew Marsh for the vacant European super-bantamweight title. Booth retained his British crown and added the vacant Commonwealth super-bantamweight belt when the referee stopped last night´s contest in Nottingham in the 11th round with Marsh ahead on two judges scorecards.

32 year old Booth (35-5, 15 ko´s) has been enjoying an Indian summer of late, and going into this fight was showing the best form of a 14 year career. He was a clear bookies favorite, but looked anything but as 27 year old Marsh (13-2, 1 ko) grabbed control of the fight from the start. A clash of heads opened a cut on the inside of Booth´s eye in the first round, and although at the time it looked serious, it didn’t prove to be a factor in the contest. Marsh set an incredible pace with constant movement and non-stop punching, relentlessly beating Booth to the punch. Marsh floored the Nottingham fighter in the fifth, although in replay it looked more like a slip. But Marsh also sustained a cut in that round, which worsened steadily during the second half of the fight, and ultimately cost him a possible victory.

Booth was clearly knocked out of his stride in the first half of the fight by Marsh´s work-rate, but came on strong in the latter stages as Marsh visibly began to tire. Marsh, the former holder of the British super-bantamweight title gave up the title in 2008 due to trouble making the weight, and looks like he should move up to featherweight. His work became ragged in the later rounds as Booth countered and picked him off, but the West Ham fighter never looked in any serious trouble.

As Marsh was ahead by two and three rounds on two judges cards, the best Booth would have got would have been a draw had the fight gone the distance. If Marsh had managed to rally in final round, he would be champion this morning. But all that was made academic when the referee, on the advice of the ringside doctor, called the fight off a minute into the eleventh round.

Booth himself felt Marsh was ahead at the time of the stoppage.

“I had him in front,” said Booth after the fight. “I was off balance tonight. It was like one of those nights when it doesn’t work for you. He had a good game plan – nice and fast, picking me off. I thought he was ahead and that I had to come on and win the last two rounds. Credit to him, you know why he’s a former champion.”

Frank Maloney will now plot a rematch between the pair. The reigning European champion is Booth´s close friend and sparring partner Rendall Munroe. Munroe, the WBC´s no.1 contender at super-bantamweight, is set to vacate the crown in preparation for either an eliminator or straight world title shot.

Maloney, who also manages both Booth and Munroe will now lobby the EBU to permit Booth v Marsh 2 to be for the vacant European crown as well as the British and Commonwealth belts.

After the fight Maloney said; “Definitely a rematch. I think Matthew deserves it. We will sit down and talk. We have to look at the European situation first, so maybe these two will meet for a triple title. They deserve it, because it’s one of the best British title fights I’ve seen in some time.”