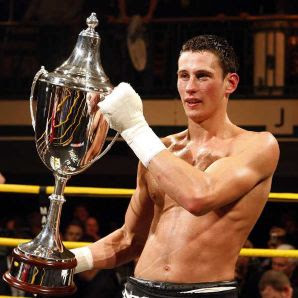 22 year old Droylsden bean-pole Prince Arron defeated George Hillyard, pre-tournament favorite Bradley Pryce and previously undefeated Brett Flournoy to grab the title of Prizefighter 10 Champion and the £32,000 that goes with it at the York Hall in Bethnal Green on Friday night.

Arron (17-3-1, 1 ko), at 6´3´´, possibly the tallest light-middleweight in the world, can now target the winner of next months clash between former foe British and Commonwealth light-middleweight champion Anthony Small, and his challenger Sam Webb which takes place at the Goresbrook Leisure Center in Dagenham, Essex, on March 26.th.

In the semi-final, Arron´s handling of the highly regarded Pryce, who was ranked in the top five domestically, proved that he is now ready to rub shoulders with that level of company on a regular basis.

It´s possible that his win over Pryce made him believe that the Prizefighter trophy was already his, but whatever the reason, Arron came close to blowing it in the final. The super-confident Flourney backed him up consistently in the first two rounds. Going into the last round it was terribly close, but Flournoy looked the stronger man until Arron dropped him with a right to the head. The knockdown was to prove the difference on the judges scorecards.

Arron´s boxing and his defensive skills have improved considerable since he was knocked out in two rounds by Irish John Duddy in 2007. He is now undefeated in his last eight fights. He has been stopped twice in his career, also losing to the aforementioned Anthony Small in two rounds when he was just 18. He must continue to improve on his defense if he wants to compete at the highest level domestically.
Arron´s lack of power is a major issue. He has registered just one stoppage victory in 21 fights. His decisive knockdown in the third round of the final against Flournoy proved that the power is there, but needs to be uncovered. His trainer must work on Arron planting his feet more often and loading up on his shots. His height should not count against developing his punching power – if anything, it should be looked upon as a positive.

Thomas Hearns stood 6´2´´ at welterweight, and he didn’t do too badly.

Scaffolder Arron was ecstatic after his victory;

“I came here to win it – not to go out in the first round or the semis. After beating Bradley Pryce I just knew. I knew I had the competition won. Brett was a bit awkward as a southpaw, but I picked up in the third round and managed to get the knockdown. In the third round I came to life, stepped across him with a peach of a right hand and got the victory.”