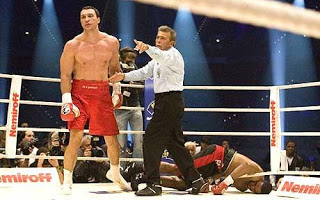 Vladimir Klitschko retained his IBF and WBO heavyweight titles on Saturday night, knocking out game challenger ”Fast” Eddie Chambers at 2:55 of the 12th round. The bout was held at the fabulous ESPRIT arena in Dusseldorf before more than 51,000 fans.
It was the second time in a week that a boxing match had attracted a crowd of over 50,000, following the Pacquiao v Clottey fight at the Cowboys Stadium in Dallas.

Not bad for a sport that is supposedly in decline.

27 year old Chambers (35-2 18 ko´s) began the fight brightly, showing scant respect for Klitschko (54-3, 48 ko´s) or his reputation as deadly puncher. In the first round, Chambers lifted Klitschko off his feet, judo style. In the second he went the whole way and threw the champion heavily on the canvass, incurring a warning from referee Genaro Rodriguez. When he wasn’t trying out wrestling moves, Chambers was controlling the fight from the center of the ring, looking to slip Klitschko´s lance-like left jab and counter with looping hooks.

Chambers was making a much stronger impression with European fight fans than did another American, Kevin Johnson, who challenged Vladimir´s older brother Vitali for his WBC title in Switzerland last December. That night Johnson looked and fought like a man in fear of his life, and barely threw a punch in anger all night.
As the fight progressed, Klitschko brought his potent right cross into play, as well as his underrated but equally lethal left hook, forcing Chambers to revert to a tighter peek-a-boo style defense, not unlike that utilized by Joshua Clottey in his unsuccessful challenge for WBO welterweight champion Manny Pacquiao´s crown last Saturday.

Still Chambers would launch himself at Klitschko with hopeful shots, almost all of which were blocked by the 6´7´´ Ukrainian. Klitschko fought with his customary combination of aggression served up with a healthy dose of caution, understandable tactics from a fighter who´s three career losses were all by way of TKO.

Chambers assaults grew less and less, as Klitschko teed of with barrages of jabs, straight rights and left hooks, many of which were blocked although enough got threw to mark Chambers up around the eyes.

By the twelfth and final round, it was clear that Klitschko was a mile ahead on points, and Chambers would need a knockout to win. Yet it was the Ukrainian who maintained his aggression.

As the round drew to a close it looked as if the fight would go the scorecards, but with ten seconds left on the clock, Klitschko caught Chambers with a hard left hook that may have landed high on the temple. Chambers fell as if poleaxed, and initially it looked bad. The referee called off the count at five when it was clear Chambers was out cold. Thankfully, after a few minutes the American got to his feet, and when he left the ring with his team, he did so on his own steam.

Vladimir Klitschko turns 34 next week, yet based on tonight performance he looks as good as ever. That’s bad news for the rest of the heavyweight division!