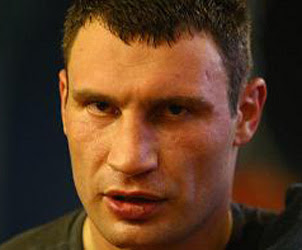 Sosnowski, born in Warsaw, Poland but based in Brentwood in Essex, was scheduled to defend his title against Britain’s Audley Harrison at the Alexander Palace on April the 9th. Harrison, the super-heavyweight gold medalist at the 2000 Olympics in Sydney, resurrected his career last October by winning Sky TV´s heavyweight Prizefighter tournament.

The window of opportunity for 31 year old Sosnowski (45-2-1, 27 ko´s) came about when negotiations with Klitschko´s original opponent, former two-time WBA heavyweight champion Nicolay Valuev of Russia broke down. Valuev, who is managed by Don King, was not happy with an offer of 2.5 million dollars as his end of the purse. A Klitschko v Valuev fight would have been a huge event in Germany, where both men have fought the bulk of their fights. The 7´2´´ Valuev lost his title last November to Britain´s David Haye on a split decision.

It will be a huge step up in class for Sosnowski. Since returning to the ring after a four year – injury forced hiatus, 38 year old Vitali Klitschko (39-2, 37 ko´s) has been in awesome form. He regained his WBC crown in October 2008 in his first comeback fight, demolishing Nigeria´s Samuel Peter in eight rounds. He defended his title three times in just nine months last year, including a highly impressive ten round destruction of the then undefeated WBC no.1 contender Chris Arreola.

Klitschko originally held the WBC belt briefly back in 2004, but was forced retire due to chronic back and leg injuries. Sine his return, he appears hell bent on making up for lost time.

Klitschko has suffered just two defeats in his career, both in highly controversial circumstances. The first came in April 2000 when he suffered a dislocated shoulder against American Chris Byrd when a mile ahead on points, and was forced to retire. The second was the result of a horrific cut above his eye when he challenged Lennox Lewis for his WBC title in June 2006. Once again Klitschko was ahead on points, and in control of the fight.

An argument can be made that Klitschko has never actually been beaten by another man in the ring in his fourteen year professional career.

Albert Sosnowski first boxed in the UK way back in 1999. He is best known in Britain for his 8th round knockout win over Danny Williams in November 2008, but he has in fact been UK based since 2002, and has fought the bulk of his fights in England. At just under 6´3´´ tall and usually weighing under 230 lbs, Sosnowski is significantly smaller than the 6´8´´ 250 lb Klitschko. His strengths are his fitness and work rate. He showed good punching power when he flattened Williams, but the majority of his 27 stoppage wins have come via accumulative punishment as opposed to one punch power. In his last fight he outworked Italy´s Paulo Vidoz over twelve rounds to win the European title.

Naturally, Sosnowski was excited about the possibility of fighting for the world title;

”This is a dream come true,” Sosnowski said. “Because of the Harrison fight I am already in training and suddenly here comes the once-in-a-lifetime chance to fight Klitschko. I want to thank him and his team for giving me that opportunity which I will definitely take. For me, Klitschko is already over the hill. I know that I am the underdog for everybody, but I tell you, Klitschko will regret that he picked me.”

On the subject of his new opponent, Klitschko said;

”I saw Sosnowski’s fights on DVD and must admit that he is a very experienced, quick and tough opponent. He will do anything to get my belt but I promise that this is not going to happen. He (Sosnowski) is not famous like Ali or Lewis, but he’s part of the new generation that are coming up. I do not want to underestimate him. It is 50-50.”

And Klitschko was scathing when asked about his original opponent;

“Valuev is chicken,” Klitschko said. “We gave him the biggest financial proposal of his career – $2.5 million – and he says ‘no’. He understands that if he loses this fight, that’s it for a long time in his career. Because it’s the money for his pension – that’s why he wanted $4 million. He’s not a big champion.”

On the subject of a possible future bout with WBA champion Haye, Klitschko said;

”The motivation is to have all the titles in the family” Vitali said. “I told my brother (WBO and IBF champion Wladimir) ‘I want to fight Haye’, but he said no, he wants to fight him. I keep my fingers crossed that Haye beats Ruiz. Not because I like him, but I want his title and [want] to shut his mouth. Maybe we decide by coin who fights him. Everyone wants to see unification. Champion against champion. Haye has the choice, one of the Klitschko brothers.”

As for Audley Harrison, Barry Hearn´s Matchroom, who promote Harrison insisted that he will still get his European title shot. Matchroom’s director of boxing John Wischhusen, said:

“Next in line is Alexander Dimitrenko. We asked him last night and are waiting for a reply. If he says no, we’re just going to go down the list of rankings until somebody says yes.”

Barry Hearn himself had no ill feeling toward Sosnowski for pulling out of the Harrison fight;

“This is a life changing opportunity for Sosnowski and he’s boxing for a lot of money. Bookmakers will make him a rank outsider, and that’s exactly what he is. But I’ve been in this business long enough to know that stranger things have happened. He is genuinely excited by this opportunity and Team Sosnowski think they are going to cause a surprise.”