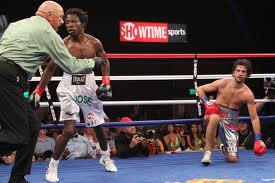 If you had backed Rocky Balboa to beat Apollo Creed in their heavyweight title fight way back in 1976, you would have had your hopes – and your blood pressure raised during that epic encounter, but ultimately as any movie fan knows, you would have lost your money.

Durham’s Nigel Wright has a chance to go one better than Rocky did that night, when he fights 29 year old Nigerian Ajose Olusegun for his Commonwealth light-welterweight title tonight (Friday) at the Olympia in Liverpool (Sky sports 1, 9.30pm), and just like Balboa´s first title shot, it comes in the most unlikeliest of circumstances. Wright has come in as a last minute substitute for Scotland’s Barry Morrison who withdrew with a back injury.

London based Olusegun ( 26-0, 13 ko´s) defeated Wright (20-5, 9 ko´s) in February of last year in a competitive fight, and has since won four more, including an impressive seventh round stoppage of Derby´s skillful Scott Haywood.

By comparison, Wright, also 29, has dropped a decision to unbeaten Paul McCloskey, won and lost three round decisions in Sky TV´s prizefighter series, and last time out he became the 18th fighter to beat Polish perennial loser Arek Malek, hardly the perfect preparation for a Commonwealth title bout.

However…Wright knows Olusegun as a fighter, having shared 12 rounds with him, he has never been stopped and has a golden opportunity that he didn’t have three days ago. He has nothing to lose and he can wake up on Saturday morning with the Commonwealth belt around his waste.

On paper it looks like a one-sided decision or late stoppage for Olusegun, but one punch can change everything in boxing. Just ask Rocky.
Fancy a flutter? Olusegun 1/6 Wright 7/2 25/1 the draw.