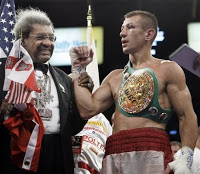 33 year old Adamek (39-1, 27 ko´s), the former WBC light-heavyweight and IBF cruiser-weight world champion, defeated a badly faded Andrew Golota in five rounds in his first foray into the heavyweights. Now he faces a much trickier opponent in 29 year old Jason Estrada (16-2, 4 ko´s) who represented the United States at the 2004 Olympics and took undefeated IBF no.1 contender Alexander Povetkin the distance in April last year.

Adamek has a strong fan base in New Jersey and this will be the well traveled Pole´s fourth appearance at the Prudential Centre.

“I´m so happy to be fighting at Prudential Center.” Adamek told the press earlier this week.

“I feel like this is my second home. My first home is in Poland, but now my second home in United States is Prudential Center. I won my second belt here; cruiserweight, but I need to win one more belt here; heavyweight.”

Adamek continued; “There are many Polish people in this area. I am happy when I come back to Prudential.”

Accordingly, ticket sales at the 20,000 capacity arena are going exceptionally well. Kathy Duva, widow of Dan Duva and daughter in law of the legendary Lou Duva, and CEO of Main Events who are promotingAdamek v Estrada said; “Tickets are selling at an unprecedented pace and we expect a huge, rollicking crowd to come out on Saturday and join in all the fun and excitement.”

Adamek is ranked no.11 at heavyweight by the WBC, at 10 by the WBA and 9th by the IBF, all on the strength of his fifth round stoppage of 41 year old Andrew Golota. A convincing win over Estrada will send him into the top six of the major governing bodies rankings. Against Golota, who admittedly was a shadow of the menacing fighter who twice destroyed Riddick Bowe in brutal bouts in the 1990´s (although ultimately disqualified in both fights), Adamek displayed sharp boxing skills and excellent speed and mobility.

Although he officially weighed 214 lbs for the Golota fight, he still looked like a cruiser-weight. He claims he loves being a heavyweight, and will be considerably larger when he meets Estrada.

“This weight is natural for me,” Adamek said “I feel very comfortable. I am eating more. I’m not hungry anymore. For the fight, maybe I will weigh what I weigh today, 222 lbs. This is my natural weight. This time, I am happier when I go into training.”

Added Adamek, “Cruiserweight was more difficult for me. I always had a problem getting to the weight, especially when I was 175. I feel very good at this weight. I feel faster. But I feel stronger because my weight is natural.”

Born in Zywiec, Poland but now based in Jersey City, New Jersey, Adamek took a little while before deciding to settle in the United States. Apart for his native country, Adamek has also fought in England, Spain, Germany and Finland. He won the vacant WBC light heavyweight title in a war with Australian hard man Paul Briggs in 2005. He defended his title twice, including a tough rematch with Briggs, before losing his crown on points to outstanding American Chad Dawson in 2007.

It remains Adamek´s only loss.

Jumping up to cruiser-weight, Adamek secured a shot at the IBF title with an impressive 8th round knockout of former champion O´Neil Bell. He won the crown with a hard fought split decision over rangy Philadelphian Steve Cunningham in front of his Newark fans at the Prudential Center in December 2008. Two easy defenses followed before Adamek decided to make the final move up to the big boys.

Adamek brings with him a different dimension to the heavyweight division. Style-wise, he is very much like WBO super-middleweight champion Robert Stieglitz with his precise, rapid fire combination punching. He is much more mobile than the average heavyweight, and if he keeps his weight up around 220 lbs, at just under

Adamek´s opponent on Saturday night, Providence resident Jason Estarda, will be hoping to derail the Pole´s lofty ambitions. Despite a build more usually associated with that of a puncher, the 6´1´´ 245 lbs Estrada is a boxer. The 2003 Pan American super-heavyweight gold medalist, Estrada´s best victories were back to back decisions over behemoths Lance Whitaker and Moultrie Witherspoon in 2008.

Aside from the Povetkin loss, he was also outpointed by the then undefeated Travis Walker in 2006. Last time out, Estrada stopped talented but erratic Zuri Lawrence in seven rounds; Lawrence had just come off a win over current European heavyweight champion Albert Sosnowski.

This fight should be a thriller – while it lasts. Estrada may like to counter-punch and spoil, but he wont be able to do that against Adamek, and he will be forced to fight at a tempo he isn’t used to. The result should be lots of quality exchanges between two gifted boxers with excellent hand speed. Estrada, with just four stoppage wins, would seem to lack the power to threaten Adamek who has displayed an excellent chin throughout his career. Estrada´s best hope would be try to outbox Adamek over twelve rounds, but Estrada looked sloppy and fought open mouthed toward the end of his fight with Povetkin. He is typical of many American heavyweights over the last 25 years in that he is happy to lug around extra padding in the ring, when the truth is he would be a much more effective fighter 15-20 lbs lighter.

And that will ultimately be his undoing. Look for Adamek to thrill his Newark fan club and storm to a stoppage win inside eight rounds.